In Japan, consumers traditionally start their day with a mix of miso soup, rice, grilled fish, nori seaweed and pickled vegetables. However, traditional breakfast options are gradually being replaced by more convenient alternatives as lifestyles become busier, more women enter the workforce, and the time required to prepare elaborate meals in the morning disappears.

These conditions have elevated the appeal of breakfast cereals in a country where they were considered a novelty just a decade ago. According to Mintel Market Sizes, volume sales of breakfast cereal in Japan grew by 25% in 2016, and are projected to see continued growth in the years ahead.

Importantly, breakfast cereal is increasingly seen as an option for adults, having previously been considered the preserve of kids. This is apparent when looking at the segmentation of the market—with sales of adult ready-to-eat (RTE) cereal driving recent growth—and can primarily be attributed to the rising popularity of one product in particular: granola.

Granola has enjoyed a stratospheric rise in Japan as consumers look for a less time-consuming way to start the day. It has benefited more than other Western-style products like muesli and cornflakes thanks to its more sophisticated and nutritious image. What’s also interesting is that even the senior population—consumers who are more commonly strangers to cereal—are consuming granola. The growing popularity of granola has encouraged many manufacturers to cash in on the trend.

Calbee’s Frugra brand, in particular, has seen great success. Positioned as a versatile option that is high in dietary fibre, iron and vitamins, Frugra’s range of granola offerings features local flavours and ingredients to appeal to domestic tastes.

According to Mintel Global New Products Database (GNPD), introductions of granola have spiked in Japan over recent years, rising by 220% in the 12 months to June 2017. Other players in the market include Kellogg and Nissin Foods—companies that are refocusing their portfolios to profit from the granola boom.

The continued efforts from these companies suggest that breakfast products offering convenience, nutrition, sophistication, and a nod to local preferences, are likely to be well-placed in the Japanese market.

To shine in this competitive environment, manufacturers should consider introducing limited edition granola in Japan featuring ingredients that are popular during certain seasons. This taps into consumers’ strong interest in all-things new, and the desire for domestic interpretations of Western dishes. 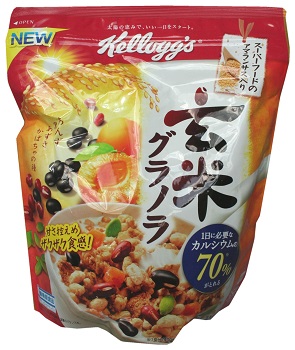 TO SEE THE FULL SLIDESHOW OF PRODUCTS CLICK HERE

Marcia Mogelonsky, Director of Insight, Food and Drink, has been with Mintel since 2000. Her expertise is centered on a number of areas in confectionery and snacks. Before joining Mintel, Marcia headed her own consulting company which focused on consumer behavior and product innovation in a wide range of industries.

IGD | We’ve identified the key themes that will shape the food-to-go sector in 2018. Health, emotional engagement, and innovative locations are all trends…