NIELSEN | Despite a drop in sales, beef still remains the most popular meat protein for Australian shoppers, with fresh beef representing close to one-third of all meat value sales.

Overall, meat sales remained stable year on year.  With households buying slightly less meat than last year, this stability can be attributed to population growth. The current population growth sits at 1.6%, according to the Australian Bureau of Statistics.

Pork experienced some growth over the past year with a 5.7% value increase, according to Nielsen Homescan data. In contrast, beef, lamb and chicken have all seen slight decreases in value and volume in the past year, and existing buyers are spending less than the previous year across the category. Despite this growth, pork still makes up less than 10% of market share, with beef and lamb making up almost 40% of all meat sales in Australia.

Annual data shows that Australian shoppers are buying less meat overall than the previous year, with research finding that both younger and older Australians are interested in buying healthier food options, restricting fattening foods, and are also exploring vegetarianism. 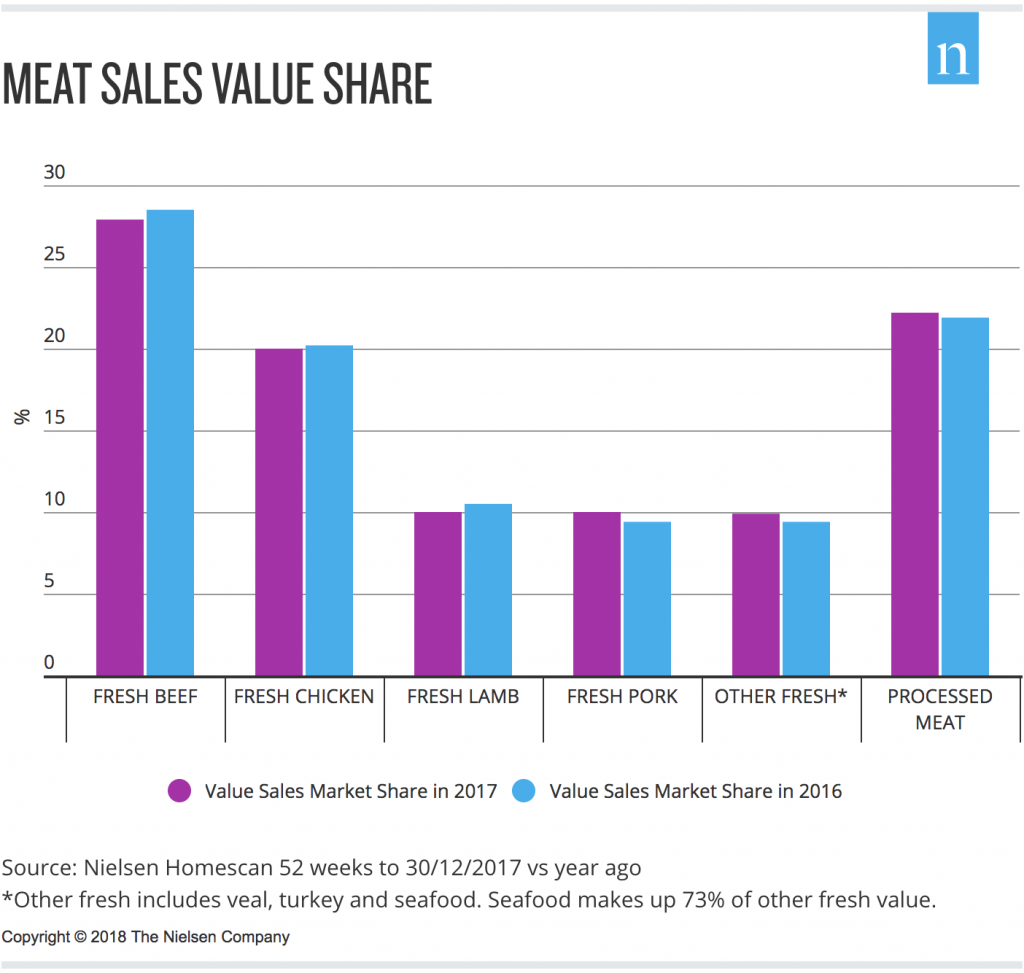 Pork’s growth is likely a result of a push that combined marketing and price promotions to draw attention to the meat. The 6-2-2 campaign, which educated consumers on the best way to cook and enjoy pork, aimed to draw attention to the “other” meat option for dinner. Lamb and pork are battling out against each other as the two major “other” meats, after beef and chicken, so price point and awareness-raising campaigns are important to inform shopper decisions.

In the last year, close to 50% of pork was sold on promotion, up from 42.5% in the previous period. With promotion playing a large part in shopper impulse buying decisions, and pork being noticeably cheaper than lamb over the past three quarters, there has been greater opportunity for purchase across all demographic groups. Australians love a good bargain, and when perusing the aisles, the question of which meat to grab for the stir fry can be swayed by a deep discount.

At the same time, lamb experienced a slight decrease in promotions, and with lamb,  beef and pork all sitting at a similar average price point (around $12), pork won out with prices trending as low as $11.10.

Lamb continues to enjoy strong price elasticity, meaning consumers respond well to promotional activity. Lamb, therefore, has the opportunity to hone its promotional strategy throughout the year, beyond its major campaign.

Lamb’s Australia Day campaign creates major waves and sales each year, so finding other opportunities throughout the year to draw consumer attention would help to maintain lamb’s place in the trolley year-round.

In the U.S., Nielsen research shows consumers are saying one thing but doing another. While 54% of American agree that white meat is healthier than red meat, red meat makes up 57% of the dollar share between the two. Despite hearts and minds moving towards white meat options, shoppers are still eating more red and than white meat, with a 3% increase in red meat in the 12 months ending July 2017. This trend is reflected in the Australian market, where Australians are buying beef as a staple each week, despite being interested in health food trends.

HOW TO WIN BACK A PIECE OF THE PIE

While beef remains a staple in the Australian shopper’s basket, the increase in pork sales in the past year show that there is a need, and an opportunity, for lamb to maintain its presence in marketing and promotions to avoid consumers switching to pork moving forward.  A strong promotional strategy and reinforcement of the health benefits of red meat as part of a well-balanced diet will remind shoppers of the importance of placing beef and lamb in their baskets.

The relationship between Australian farmers and supermarkets is far from idyllic. Following a successful debut in Victoria, online-only supermarket The General Store has just…