The range of carbonzero Simply Milk is expanding to include a 3-litre bottle size following the success of the inaugural 2-litre bottles, introduced exclusively into New World, PAK’nSAVE and Four Square stores in the North Island in 2020.

Developed in a collaboration between Kiwi owned co-operatives Foodstuffs North Island and Fonterra, Simply Milk has been certified carbonzero by supporting native forest regeneration and renewable energy projects that offset our emissions. This process is verified and audited by Toitū Envirocare, which is a wholly-owned subsidiary of Manaaki Whenua – Landcare Research, a Government-owned Crown Research Institute.

Since the launch of the carbonzero Simply Milk brand, Foodstuffs and Fonterra have continued to make progress on climate change. Fonterra is taking steps to achieve its sustainability targets including issuing greenhouse gas reports to farmer suppliers and announcing trials for Kombucha to reduce methane emissions in cows and has switched their Te Awamutu site from coal to biomass reducing emissions by 10% in the past year.

Foodstuffs is also supporting New Zealand’s climate change efforts and has joined the Climate Leaders Coalition. As a part of this coalition, they’re committed to setting a carbon reduction target and measuring and reporting their carbon emissions each year.  Foodstuffs’ target to reduce its carbon emissions by 21% by 2025, from a 2020 baseline, is aligned with the Climate Leaders Coalition 2019 Statement.

Kiwis have been doing their bit too, and by choosing Simply Milk they’ve helped offset 4223 tonnes of carbon. This is equivalent to the carbon captured by 10,000 planted native trees over 50 years. 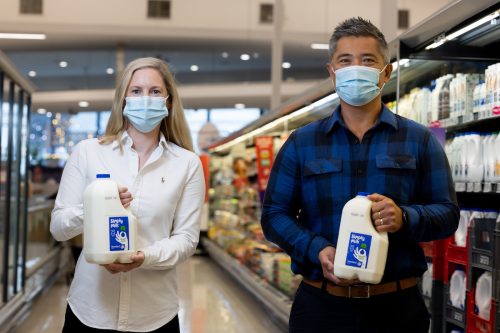 “New Zealanders are increasingly more conscious of the impact of what they buy and consume on our planet, and we’re seeing this trend translate to the choices we bring to our customers," said Christofer Anderson, Head of Merchandise for Chilled Beverages at Foodstuffs North Island.

Since the  introduction of Simply Milk back in 2020, over 2.2 million bottles have been sold, and because customers tend to buy the size of milk to suit their fridge, it was time to introduce a Simply Milk for 3L milk drinkers, who also want to make a simple swap that can make a big difference.”

“Simply Milk is a great way for Kiwis to support action on climate change,” said Rosie Cotter, National Sustainability Manager at Fonterra Brands NZ. "As New Zealand owned co-operatives, Foodstuffs and Fonterra are committed to delivering sustainable products s for our customers that are better for the planet. Simply Milk helps us achieve this.”

Simply Milk is now available in both 2 litre and 3 litre pack sizes in full-fat options. Simply Milk is exclusive to New World, PAK’nSAVE and Four Square stores in North Island only.

An ailing mother and an ancient text led to the creation of Puraty, a range of functional organic beverages. Puraty sources botanical ingredients that…