After much anticipation and excitement, Whittaker’s is pleased to confirm the release of its Oat Milk 42% cocoa chocolate proudly made with locally sourced Harraways oats. This delicious new addition to Whittaker’s permanent range is the result of nearly two years’ work perfecting the recipe and applying a bit of kiwi ingenuity.

Whittaker’s Product Development Manager, Megan Sinclair, said Whittaker’s Oat Milk will appeal not only to customers who prefer plant-based options or flexitarians, but to anyone who loves to try something new or mix it up. 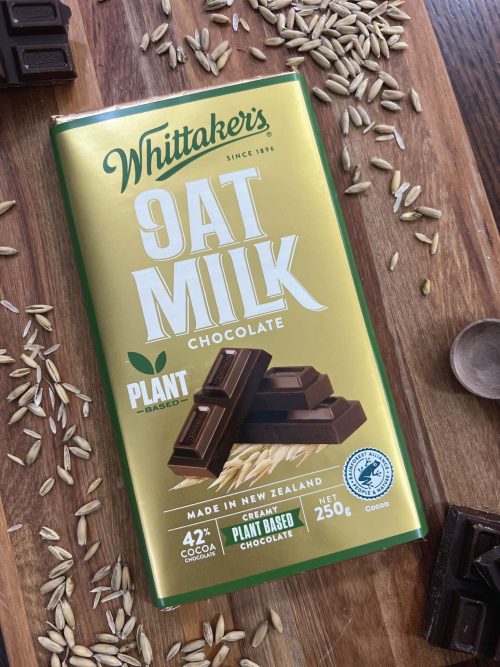 “We think Whittaker’s Oat Milk has a distinct and moreish flavour that will have broad appeal to Whittaker’s Chocolate Lovers in general. It’s made with the same attention to quality as all of our delicious chocolate.”

“We’re delighted to have been able to produce a plant-based chocolate created from the best New Zealand oats, just as our milk chocolate is created with all New Zealand dairy products.”

Like Whittaker’s, Dunedin-based Harraways Oats, have been proudly New Zealand-owned for over 150 years and share Whittaker’s commitment to quality.

Harraways Chief Executive, Henry Hawkins, said it’s an honour to partner with Whittaker’s, New Zealand’s Most Trusted Brand for over a decade.

“At Harraways, we love to innovate, and we’re absolutely delighted to be Whittaker’s partner in the creation of their first plant-based chocolate. We’re biased of course, but we think people are going to love the subtle toasted oat flavours of Whittaker’s Oat Milk chocolate.”

Like all Whittaker’s chocolate, Whittaker’s Oat Milk chocolate is made from beans-to-bar at its single factory in Porirua. It is also Rainforest Alliance CertifiedTM, as is Whittaker’s entire range of products that are crafted with Ghanaian cocoa beans.

Whittaker’s Oat Milk is a permanent addition to its chocolate range and is available in a classic 250g block. It will be available in stores nationwide from Monday 18 July 2022.

Bic has launched a gender-neutral razor brand that will be exclusively sold on Amazon. The launch will be the first product the company has…