The Hellers Sharp Blacks are New Zealand's national butchery side who compete at the World Butchers Challenge (WBC), held every two years. We caught up with the new team captain, Riki Kerekere, ahead of the competition in Sacramento in September. 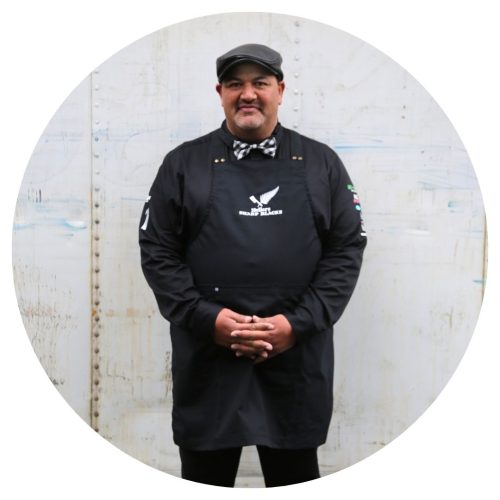 "I’m 53 with three adult children and six beautiful Mokos. I grew up in Otara, Auckland - a place I still call home and a community I love very much. "

Kerekere left school at the ripe age of 16, with no qualifications and no idea what he wanted to do. He and his father had agreed that school was not for him and he had to find some sort of employment. Kerekere wound up working at Rainbows End.

"While there, I met my first employer, willing to take me on as a butcher’s apprentice. I’m so grateful to Ray & Judith Barry who took a punt on me."

Kerekere ended up working as a butcher for Foodtown Supermarkets for a number of years before taking up a position with the Mad Butcher. Eventually, he returned to what is now Countdown as the Boning Room Operations Manager and has held a number of positions within the meat category ever since. Kerekere considers himself very lucky to have been mentored by some amazing people along his journey.

Team NZ has a strong track record at the WBC, they are the three-time world champions and 2018 silver medalists. With a relatively new team and his first year as captain, Kerekere has one simple hope - "That everyone works to the best they can be. There are no egos, it’s just about commitment, respect and pride. We have already achieved something special and that is to represent our trade, our country, our whanau, and ourselves in something we are passionate about."

Navigating a pandemic-fuelled world has not been easy on the team, already facing some challenges and extenuating circumstances that prevented a number of team members from participating this year. There was a strong pool of contenders for the new additions to the 2022 team, and the Sharp Blacks made sure that the team was formed on a good balance of skills from different sectors of their trade.

"I believe we have a strong team ready for Sacramento. "

"If I had to describe our style, I would liken it to the good old Kiwi number 8 wire. We are very good at taking something and putting our own unique kiwi spin on it."

The meat industry is a huge one, and Kerekere considers the WBC to be hugely important as it is one of the only events that showcase industry skills at an international level. It provides competitors with the opportunity to connect with like-minded people from around the globe and to learn from one another. When this happens, new trends are shared and the industry as a whole is furthered.

"As an industry it’s important we continue to address global concerns to stay relevant and sustainable. It will be of no surprise to many that the plant-based movement is of course something we are staying abreast of to ensure that meat consumption is still of high value."

For anyone interested in working in the meat industry, Kerekere wants people to know that while it might appear a tough environment, it really isn't. There are many different roles within the industry and a scope that allows people to try different positions for size.

"It’s an exciting industry to be a part of and you will meet the most colourful characters so go for it and of course, enjoy the ride. Who knows, you could be travelling the world showcasing your skills with the Hellers NZ Sharp Blacks."

To finish, we had to ask what the national butchery team captain's favourite cut of meat is.

"Easy - a three-inch-thick T BONE Steak. You get the best of both worlds - a fantastic thick sirloin and a tender eye fillet."

New World is the premium sponsor of Three’s MasterChef New Zealand, and the two have worked together to produce an exciting way for Kiwis…