Countdown has announced its first Green Star rated supermarket in Auckland will open in time for Christmas within the new Waiata Shores development in Manukau.

The new 4200sqm store is a $30+ million investment by Countdown in this growing part of South Auckland, and is expected to create around 100 new jobs.  As a Green Star development, the supermarket has been designed, built and will operate in an environmentally-conscious way that meets international Green Star certification standards.

Countdown’s Director of Property, Matt Grainger, said construction today has a responsibility to leave a lighter footprint on the planet, and Waiata Shores made sense as the first Green Star store in the North Island and in Auckland.

“Auckland’s growth means that we have to continually invest in our store network but it doesn’t mean that we have to do things the way they’ve always been done,” says Matt Grainger.  “We love the ethos behind Waiata Shores and we’re proud to be opening a store here that has been specifically designed to have a lower environmental impact for the community, and be fit for the future as the area grows.

“Countdown has some incredibly ambitious sustainability goals to achieve by 2025, including a 4 Green Star design and as-built rating for all of our new property developments, and a 5 Green Star minimum standard by 2025.  Our new Waiata Shores store is an important step towards that goal, and while it’s not simple or cheap to meet Green Star standards,  it’s an investment we need to make,” said Matt Grainger. 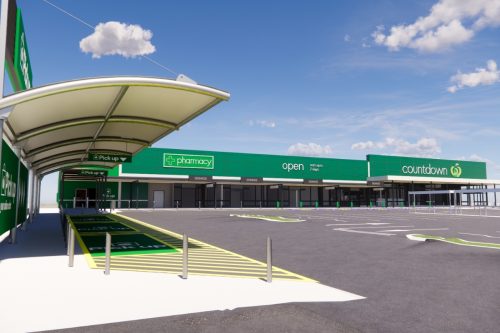 Fletcher Living is developing the wider Waiata Shores neighbourhood of over 700 homes, and CEO of Fletcher Living, Steve Evans says they’re delighted to have Countdown as part of the new community.

“The new Countdown store is a fantastic addition to our award winning development at Waiata Shores.  We’re really pleased that they’ve chosen to invest here and for it to be their most sustainably minded store in the North Island is in line with our own ambitions for the broader site,” said Steve Evans.

Green Star is an internationally-recognised rating system for the design, construction and operation of buildings, fitouts and communities.  Countdown opened New Zealand’s first Green Star supermarket in Richmond in June this year.

Some of the emissions, water, paper and energy saving features in the two Green Star stores include:

The new Countdown Waiata Shores will also include a Drive-Up option for online order pick up, an in-store Countdown Pharmacy, an extensive range of fresh produce, and an in-store bakery, deli and Cellar.

It is expected to open in December 2021.