The traditional six-pack is no more as Carlsberg introduces the snap pack. To reduce the use of plastic the company has developed glue technology that will allow a six pack of cans to be glued together, an initiative that will see Carlsberg reduce the amount of plastic used by 76 percent.

Not only will the initiative dramatically reduce Carlsberg’s waste but will also have a vast global impact on the environment with estimates stating that the effort will eliminate 1,200 tonnes of waste, which amounts to six million plastic bags.

The snap packs are not the only project that Carlsberg has been working on. The company has also developed bottle caps which remove oxygen to make beverages taste fresher and last longer. To improve recyclability, Carlsberg has switched to ‘cradle to cradle certified’ silver links on its bottle labels. The beverage giant has also added a new coating to its refillable bottles to extend lifespan and thus improve their footprint on the environment.

“We always strive to improve, and today’s launch clearly shows our ambition to follow in our founder’s footsteps towards a better tomorrow. Carlsberg Snap Pack will significantly reduce the amount of plastic waste, and we look forward to giving our customers better beer experiences with less environmental impact,” said Cees’t Hart, CEO, Carlsberg group.

Carlsberg is not the first beer brand to ditch the six pack for an environmental reason. Australian brewer, Cascade recently announced they would no longer be using the plastic packaging system instead adopting a cardboard alternative. 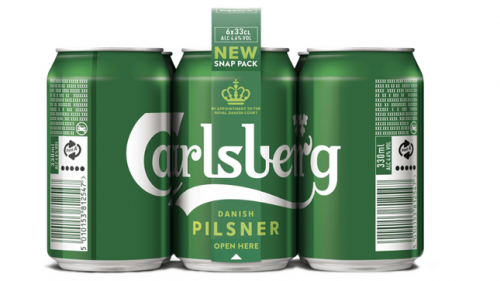