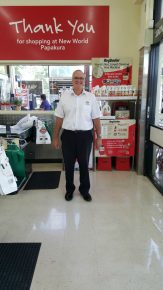 Work has officially kicked off on the latest 3,000 sqm New World store in Papakura, just across the road from the current one opened in 1982. The supermarket is set to include a fresh bakery, butchery, deli and seafood counter. It will also feature LED lighting, rainwater harvesting and a CO2 refrigeration system, as well as 158 car parks.

“I’ve loved being part of the Papakura community with the current New World, and I’m excited to be a part of the new store,” said Peter Lynch, who had been owning New World Papakura since 2013. “With the new supermarket under construction just over the road, we are able to watch with anticipation as the store takes shape.”
The existing NW will continue trading until the new one is ready.

It has been 20 years since the day Sir Peter Blake won the America’s Cup wearing a pair of red socks, and now the…