Lewis Road Creamery launched the initiative after receiving multiple requests from shoppers asking for a return to glass.

“The plastic problem really worries our customers,” said Lewis Road Creamery founder and CEO Peter Cullinane. “Two years ago we switched to 100% recycled plastic bottles but we’ve always wanted to do more, so this is another step in the right direction.”

Auckland shopper Jenny Bramley said taking a glass bottle to fill at the grocery store is no different to taking a reusable bag.

“I got in touch with Lewis Road earlier this year letting them know my dream of being able to get milk in glass bottles.  I’ve gone to a lot of effort in the past to buy milk in glass, including taking my own bottle to the farmgate.  So it’s great that finally there is a much more convenient option and to know I won’t be adding to the plastic mountain,” said Bramley.

The milk dispensers will initially be installed at Farro stores in Auckland before being rolled out nationwide in other premium grocery stores. 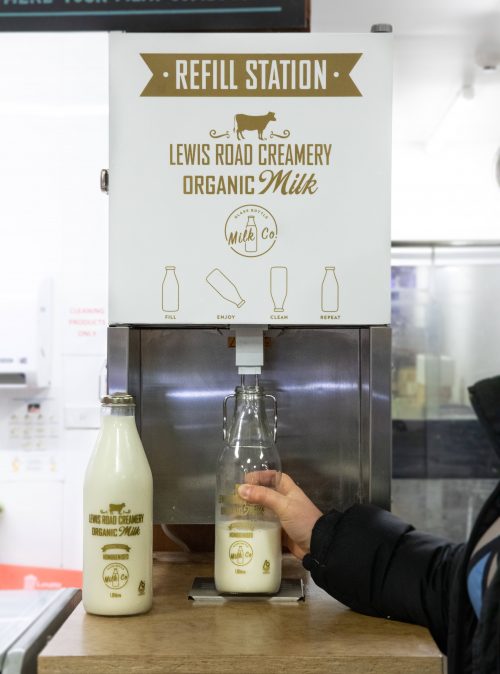 “We know that refill stations work brilliantly at small farmers markets around the country, and we really want to see that same responsible approach at a more mass market, urban level,” said Cullinane.

With around 23,000 tonnes of plastic milk bottles entering New Zealand’s waste stream annually, Lewis Road says that anything that can be done to reduce this amount of plastic waste is a positive thing.

“We are always looking for new ways to offer shoppers more sustainable shopping solutions and, like our friends at Lewis Road, we have received many requests from our customers for milk refill stations like these,” said Farro CEO Bryce Howard.

“A trial of the milk dispenser in our Grey Lynn store has been really well received by our customers so we are looking forward to having more dispensers in more stores for more of our customers to access.”

The reusable glass one litre bottles cost a one-off $4 and each milk refill of Lewis Road Creamery Organic Homogenised milk is $4 per litre.  Milk refillery stations are currently available at Farro in Grey Lynn, Constellation Drive and Epsom with more stores soon to follow. 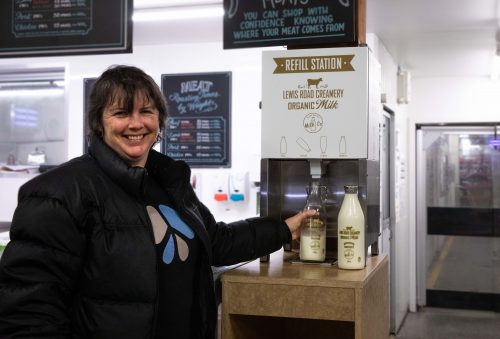