Palmerston North will soon be home to a brand new, purpose-built distribution hub on Alderson Road, servicing Countdown’s stores from Gisborne to Wellington.  Construction starts on the new state-of-the-art building over the next few weeks.

The new distribution centre is expected to open in late 2021, and when fully operational, will be able to move around 450,000 cartons a week through the Countdown, FreshChoice and SuperValue network.  It will replace Countdown’s Mako Mako Road distribution centre, and will be approximately 38,000sqm - around three times bigger than the existing site.

Brett Ashley, Countdown’s General Manager Store Operations and Supply Chain, said more than ever, the last few months have shown the importance of a strong supply chain, and Palmerston North is a critical part of that for Countdown.

“We could never have imagined the responsibility supermarkets have held over the last few months to safely and quickly provide Kiwis with food and essentials.  We’ve pushed our supply chain beyond what we ever thought was possible,” said Ashley.

“This investment in Palmerston North is a critical part of ensuring we can meet the future needs of our Lower North Island customers, whether that’s on a daily basis with better product availability, preparing for future growth, or making sure we are future-proofed to handle what might be thrown our way.

“We are excited to be partnering with PMB Carrus JV, and Watts and Hughes on this build, and create local jobs for Palmerston North.  We’d also like to thank the council for their support during the planning process."

Grant Smith, Mayor of Palmerston North, said the new distribution centre is an important investment in the region.

“The Palmerston City Council is very excited that Countdown are pushing ahead with the development of their new Distribution Centre at the Manawatu Business Park, next to the Palmerston North Airport.

“The project is significant in size and is another positive sign of development in the city to provide job opportunities for building, construction and associated trades. The sheer size of the Distribution Centre further strengthens the city as the freight and distribution hub for the lower North Island,” said Mayor Grant Smith.

“We are thrilled that Countdown has chosen Palmerston North as the place to build their new Lower Central North Island DC Hub. The project brings continued positive growth to the region and it will be good to see a boost to the local supply chain involved.” 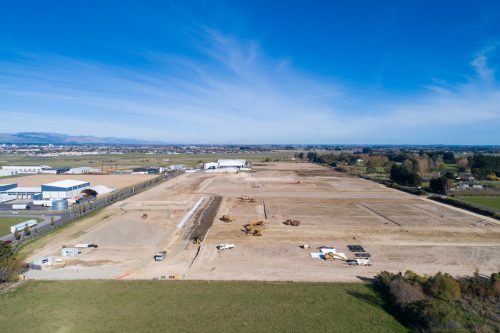 As seen in a recent study by Nielsen, one in three consumers are spending more on premium products (normally 20 percent more expensive than the…