Seventy-eight checkout operators from New World and PAK’nSAVE stores across the Waikato region went till-to-till in Foodstuffs North Island’s 70th annual Checker of the Year competition, which has attracted a record number of entries this year.

The checkers competed on stage against one another while being judged by a team of eight senior Foodstuffs staff. Checkers were assessed on their speed, presentation, customer service and accuracy as they scanned 30 items as quickly as possible, while also staying friendly and composed.

Foodstuffs North Island CEO Chris Quin said this competition celebrates the skills of those who are at the front-line of the public’s experience of their local supermarkets.

“Our checkout operators are the face of our business, and this event is an opportunity to shine the spotlight on them and show our sincere appreciation for the contribution they make every day to our success in meeting customer expectations.

“The fact that this is the 70th anniversary of the competition, and that it is bigger than ever before with over 120 stores participating, reflects the value that our staff see in it. It gets quite competitive, but is also a chance to have fun and build relationships,” said Quin.

When it began in 1948, it was known as the ‘Listing and Adding’ competition, and was a maths-based challenge requiring checkers to add the prices of items manually. Reflecting the changes over the years since then, the competition has evolved to focus on a broader range of skills.

With a ‘blast from the past’ theme this year, competitors’ colleagues, family, and friends dressed up to reflect a decade of their choice from the past 70 years, cheering the competing checkers on with banners, chants and store mascots.

The winner received an HP Sprocket Printer, while the second place-getter won a Bluetooth Speaker and the third place-getter won an Omen Headset. The other checkers in the top 10 each received a $50 Prezzy Card. There were also prizes for the best dressed team and the best supporting team.

As the winner of the Waikato region heat, Rebecca Brosnan will go on to compete against the winners of the nine other regional heats held over June-July. Each regional winner will be mystery shopped between August and November to determine the overall North Island Checker of the Year winner and two runners-up, which will be announced in November. 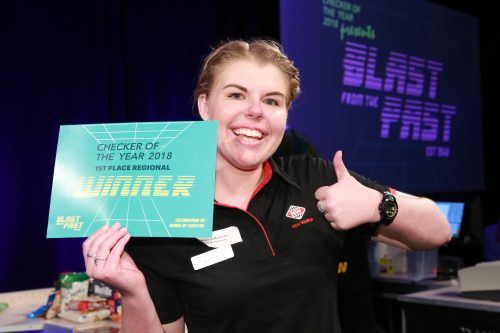 Minor Figures has revealed an alternative to those traditional free from kinds of milk with Oat milk. Perfect for latte art the milk has…