Existing shareholders had first rights to increase their holding and showed significant support by taking up most of the available capital during the exclusive investment period. The remaining shares were made available to new shareholders the following week.

Due to the unprecedented number of investors attempting to acquire the remaining capital, however, the limited supply was quickly snapped up by a select few, setting a record time for the investment platform.

The Auckland-based brewery, which was founded in 2013 by Andrew Childs, has become a leading national beer brand through tongue-in-cheek marketing and innovative award-winning beers. 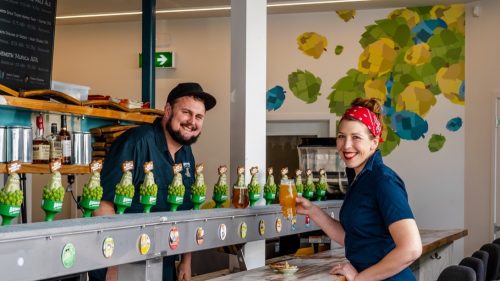 Childs said he was encouraged by the level of interest and support that was shown for the business and by the unrelenting faith shown by existing and new shareholders, despite the disruptive year.

“When my team and I started making plans for this capital raise, we never imagined it would be this successful. The investor interest has been phenomenal, and I’m so grateful that fans believe in our brand to the extent our target was reached in such a short space of time,” commented Childs.

“Our aim is to bring brilliant beer to all parts of New Zealand, and we have a lot more exciting projects in the pipeline for 2021. The funds raised will help us continue to share fun, unique tastes with beer lovers, so we’re thankful for the support Kiwis have given us and the fantastic assistance Snowball Effect provided.”.

“Since launching our first capital raise offer in 2014, we’ve never had the level of interest that Behemoth Brewery has experienced. Usually, our public offers can run for up to a month, providing plenty of time for investors to review the material and make an investment decision,” added Burnett.

“This goes to show just how well-loved Behemoth is in the craft beer industry, and it’s a testament to their strong brand, customer loyalty and continued innovation.”

The countdown has officially started. Exhibitors have only a few weeks left to secure a spot at ISM + ProSweets Cologne 2016, scheduled from…