As the ‘barbecue season’ is just about to kick off, approximately 500 sausages have been cooked, tasted and judged by a panel of 24 industry experts, to find NZ’s supreme sausage.
Sponsored by Devro, Kerry Ingredients, Hally Labels and Alto Packaging, the Devro Great New Zealand Sausage Competition comprises of 12 categories, including beef, pork, poultry, precooked, gourmet and continental. Each sausage was judged on its visual appearance as well as its taste, aroma, texture and composition. 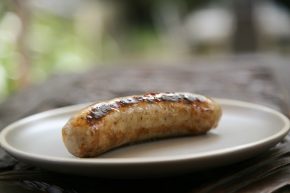 New World Rolleston took out the People’s Choice Award and a gold medal for its Pork & Tasmanian Apple Cider sausage. “I came up with the idea for this sausage but making it was a real team effort,” said New World Rolleston butchery manager Neal Algar, who had been making sausages for the past ten years. “Together we tweaked, tasted and perfected the recipe, and it’s them who actually make the final product, which isn’t easy because it’s handcrafted.”

The New Zealand Specialist Cheesemakers Association (NZSCA) has added a new accolade to its awards. This year the NZSCA will recognise cheese retailers at…