A while ago, while sipping a delicious cabernet shiraz at the launch of Penfolds’ new-release wines, a very polite and competent young man approached us with a warm smile, eager to pour some wine knowledge into our heads. We know a ‘rising star’ when we see one. 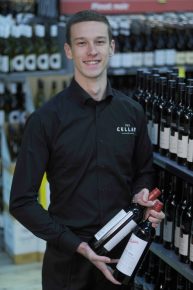 Based in New Zealand since 2012, where he settled down with his beautiful Russian-Kiwi wife, twenty-five-year-old Anton Fedorchenko grew up in the highly-developed economic centre of Krasnodar, in Southern Russia.

Even though Anton chose a completely different path, his father Alexey, who is a famous cardiovascular doctor back in Russia, has been and still is a deep source of inspiration. “I’m proud of you, son,” is the best compliment Anton said he had ever received.

Much more attracted to a world of food, chefs and ‘the theatre around service’, as he put it, rather than scalpels and operating rooms, Fedorchenko began dreaming of managing restaurants from the age of 12. Over the past eight years, he has been travelling the world to gather the education and experience needed to kickstart a career within the sector, by completing his studies at the HTMI in Switzerland and the BMIHMS in Australia.

Looking to make a bigger impact on trade, four-and-half years ago he also became a professional sommelier. “It all started with various roles in Gault & Millau and Michelin restaurants, where I developed my passion for food and wine to a professional level. Their impeccable service standards, perfect timing and the art that combined it all, made me travel around the globe searching for excellence.”

Formerly employed as a sommelier at renowned restaurant Andiamo in Herne Bay, Fedorchenko wanted to become part of something big. So when, in the lead-up to the opening of Countdown Ponsonby, a position as wine/beer specialist became available, he grasped it with both hands. So far the journey has been an exciting one.

“Our biggest challenge, as Countdown’s first premium store, is to change our customers’ perception on what to expect when they enter our door. They don’t expect to have a beer and wine expert on-hand to help them with their decisions, and it does take time to build relationships with customers as I share my extensive knowledge.”

Personal engagement remains the most rewarding part of his job, the other being watching the passion ignite in his team.
“No two days are the same in my role,” he said. “I like to challenge my team on their knowledge and the targets we need to achieve. It is important that I show them respect, and make them feel valued. There is a saying that ‘fish get rotten from the head’ - this means that if I’m motivated, then my team will be inspired to deliver results.”

In the near future, he really would like to make a meaningful impact on wine ranging in New Zealand, so his next career goal is to move across to the merchandise team for the wine category. Meanwhile, he will continue to do what he loves the most: cooking and drinking wine with his wife, and travelling the world in search of new, outstanding wines.

Leaders from the food industry in the Netherlands and New Zealand gathered together yesterday in Auckland, to discuss the Future of Food. Organised by…