GlobalData, a leading data and analytics company, has conducted a survey that reveals environmental concerns impact 71.4 percent of consumers’ choices while grocery shopping. Emily Salter, a retail analyst at GlobalData, suggested that concern has increased for consumers since the airing of the BBC’s Blue Planet documentary series, which famously portrayed the disastrous effects of plastic waste on the environment.

Since its 2001 airing, consumers have witnessed not just recordings of environmental damage, but real-world effects on their everyday live: waste-ridden waterways, rubbish build-up, and wildlife discovered full of plastic on New Zealand shores mean consumers here and overseas are turning toward brands that promote a more sustainable image.

“Although the retail industry’s impact on the environment goes far beyond the use of plastic, this data indicates that the recent heightened awareness is likely to have contributed to the high level of consumers considering environmental impacts,” said Salter.

Globally, many retailers have announced plastic reduction plans to prove to customers their concern about the environment. Morrisons in the UK will introduce paper bags for loose fruit and vegetables, and Marks & Spencer has a well-established clothing recycling scheme.

Leading supermarkets in New Zealand have announced a phase-out of single-use plastic bags, and a commitment to further reducing waste in their stores. Countdown has already stopped selling single-use bags in some of its stores, and New World will be doing the same in the new year. Farro Fresh and GoodFor are both Auckland-based companies encouraging customers to BYO containers – best choices for the environment are glass, ceramic, or a recyclable material.

See a graphed interpretation of GlobalData’s results below. 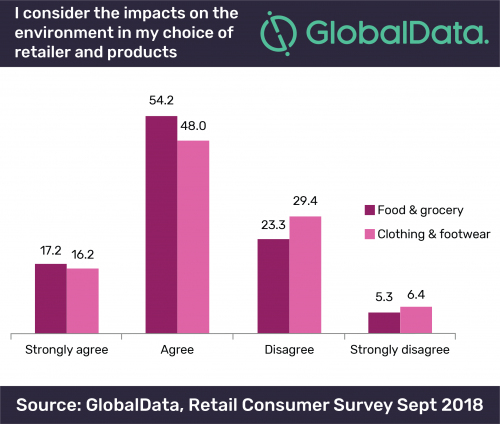 New World Long Bay has opened with a young Kiwi family at the helm of the new eco-friendly store. Marcus Te Brake and partner…