Ferrero UK has announced plans to invest $8.61 million in launching an entirely new confectionary range for Christmas 2018. Following a prosperous 2017, which saw profits rise by $10.99 million, Ferrero has announced the launch of a new Christmas range set to be stocked in domestic supermarkets in the UK.

Ferrero has seen consecutive growth for the last five years. The company’s boxed confectionary range saw an increase if 7.3 per cent last Christmas while the company’s Thorntons brand increased 12 per cent in sales. Well-known brand Ferrero Rocher reported a growth in sales for the sixth consecutive year with a $3.7 million increase in profits.

A spokesperson for the company stated that “It is important as a leading confectionery manufacturer to offer retailers products and ranges that help them cater to different types of festive shopping needs.”

The newly launched range will include a Thorntons branded boxed collection as well as a novelty “Cheeky Elf” chocolate figure. Kinder will also see new additions added to their novelty Christmas range with the addition of a Kinder Unicorn and a new eggs collection. Limited edition Nutella jars will also be available for the festive season with the brands first glow in the dark jar being released at the end of the year. UK shoppers will also have the opportunity to create personalised Nutella jars in selected department store in the lead up to Christmas.

According to Neilson data, the Kinder brand had a highly successful year, reporting a 31 per cent increase in sales. Currently, Kinder Joy is the UK’s number one growth driver in the self-treat category. 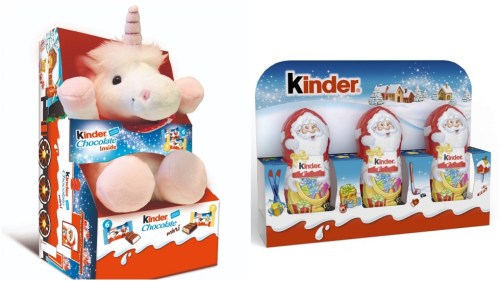 Fuelled by a pioneering spirit since it was first established, Saint Clair Family Estate has deep roots in history and a fresh outlook toward…