2017 saw Palace Poultry under investigation after it came to light that’s its “free-range egg” may not have actually been free-range. As a result, egg producers who purchased eggs from the farm resorted to having to recall the products as they were not able to guarantee the authenticity of the free-range eggs.

A number of egg producers already stamp their own eggs. Zeagold-owned Woodland Farms began stamping their eggs after the Palace Poultry scandal, to reassure customers of the origin of each egg while Frenz Eggs has its own “Flock Locator” that grades each Frenz egg flock by flock.

Early this year, Countdown also began stamping its own free-range eggs. The stamp uses food-grade ink to print a Countdown logo and code on each egg at the farm, right after being laid and before packaging.

Nikhil Sawant, Countdown’s head of perishables, said that increasingly customers want more detailed information about the origins of their food. “Our customers want to know where their food comes from, particularly if their purchasing decision is based on animal welfare. The quality, safety and integrity of the products we sell on our shelves are paramount to us, and by stamping our eggs, we want to provide that next level of traceability for our customers too.”

HOW DOES IT WORK?

The system is easy for consumers to use. Each egg will be stamped with a five-digit code consisting of a two-letter definition of the farming system, such as FR for free-range or BN for barn, and then three numbers to identify the egg producer such as 123. 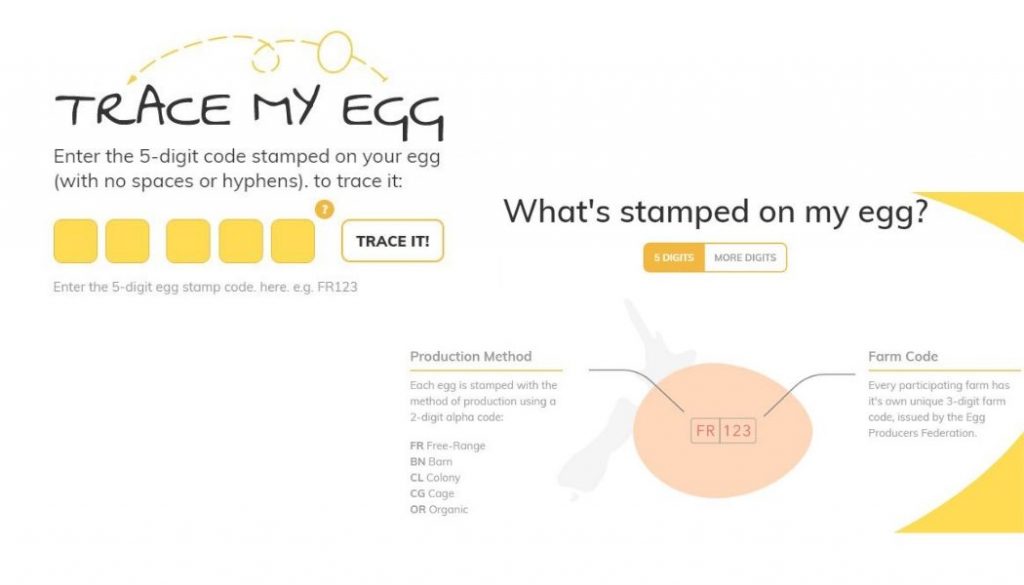 The voluntary program requires each farm to agree to two levels of auditing consisting of annual checks and spot checks. Yearly inspections will be conducted by the Ministry for Primary Industries and Assure Quality and must be included in each egg producers risk management programme. Secondly, farmers must agree to spot checks conducted by a third party.

The 'Trace My Egg' website states that participating farms “have agreed to uphold strict terms and conditions.” These include integrity, transparency and traceability.

The system has so far been well received with 70 percent of the industry already signed up to the programme.

The initiative is just another way in which the Food and Grocery Industry is meeting the increasing demand from consumers concerned with a higher level of transparency.

A new $141 million cheese plant will be built by Fonterra to replace the old Stanhope factory, which was destroyed by fire one year…