New Zealand’s Health Star Rating system has caused controversy since its introduction in 2014. The voluntary program rates the healthiness of packaged foods from half a star to five stars. The aim of the system is to provide a quick and easy way for shoppers to make healthier choices however many major manufacturers have been accused of misusing the system to make their products appear healthier.

Most recently consumer advocacy group CHOICE has called for a review of the system asking Health Ministers to improve food labels so that foods high in added sugar receive lower Health Star Ratings. The call for a review by CHOICE comes as new modelling shows how a Health Star Rating algorithm that factors in added sugar would penalise products and then increase ratings for products with naturally occurring sugars.

“The Health Star Rating System is meant to help people glance at a group of products to understand which options are healthier than others. Health Stars are a good system, but they need to be stronger to really help people make easy decisions,” said CHOICE food expert, Linda Przhedetsky.

“CHOICE’s own modelling has found that increased penalties for added sugar could significantly impact the Health Star Ratings that products are given. Some products containing added sugar would lose as much as 2.5 stars. However, healthier products that contain naturally occurring sugars – like fruit and dairy – gain stars.”

The group tested their new modelling system on some common supermarkets items as an example of the changes that could occur if added sugar items were penalised.  Nestle’s Milo and Kellogg’s Nutrigrain cereal currently have four stars but under the new system would drop to one and a half stars. While Gippsland Natural Yogurt would increase by half a star from four to four and a half stars. 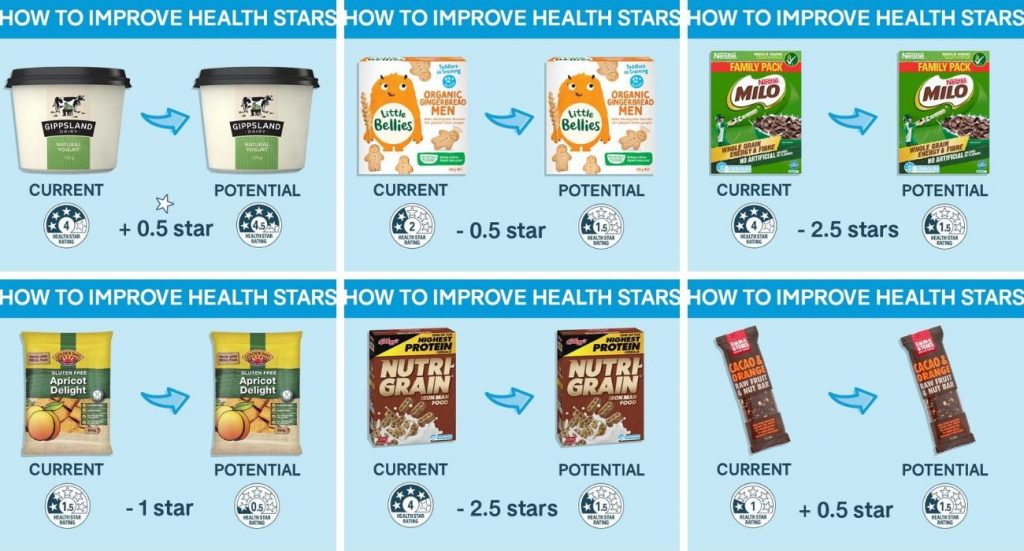 Przhedetsky is calling for Health Ministers to introduce added sugar labelling on all packaged foods and to ensure that added sugar is more heavily penalised in the Health Star Rating System. “Right now, the Health Star Rating algorithm treats all sugars the same. The system doesn’t distinguish between the extra sugar that’s added to foods like breakfast cereals and the naturally occurring sugars in dairy or fruits.”

This isn’t the first time the failings of the system have come under the microscope. Last year, public support for a re-examination of the Health Star Rating system grew in support after a bottled water received a two-star rating. Some critics were immediately outraged by the information, which was revealed by carbonated water company Sodastream. “We’ve got a health star rating system that is worse than useless, and does actual harm to people in New Zealand,” said Professor Grant Schofield, a professor of Public Health at AUT.

This is not the first time CHOICE has questioned the system, in 2016 the group pointed out that Nestlé’s powdered drink Milo could achieve a 4.5 stars rating only when consumed with 200mL of skim milk, whereas it would only have 1.5 stars when consumed on its own. As for Kellogg’s, although it's Crunchy Nut Corn Flakes Clusters only score 2 out of 5 stars, an example HSR of 3.5 was displayed on the side of the box.

It appears that the controversial rating system needs to be reviewed and that updated guidelines on the difference between naturally occurring sugars and added sugars need to be taken into account.