A new study conducted by the Foundation of Advertising Research has concluded that there is no relationship between the amount of alcohol consumption and alcohol advertising spend. The data collected showed that while alcohol advertising spend increased by 15 percent the per-person consumption of alcohol decreased by 14 percent, and the number of alcohol licenses also continued to rise significantly. The contradicting data shows that there is no clear correlation between the two.

According to the study, restrictions on alcohol advertising may also not have the desired effect, as data showed that restricted advertising did nothing to help reduce the consumption of alcohol. Before 1992, alcohol advertising on radio and television was significantly restricted with advertisements banned from mentioning a brand or price. After the restrictions were loosened data didn’t show increased consumption and in fact, reflected the opposite.

“We hear so often that New Zealand is at ‘peak alcohol’ and that we have a crisis. Such calls ignore the facts, and it’s important that people can see the real data, so they feel positive about their behaviour changes," said Nick Leggett, executive director, NZ Alcohol Beverages Council.

“Just as seeing a shampoo advertisement does not make you buy more shampoo, but rather influences your choice of shampoo. It is the same for a wine or beer advertisement. It’s not some nefarious conspiracy to hook non-drinkers onto alcohol, as the anti-alcohol lobby loves to try and make out.

Advertising isn’t used to as a weapon to hook no-drinkers, and the data shows that if it were, the advertising would be a resounding failure. “If alcohol advertising was about driving volume, then it has been absolutely proven to be an abject failure, and the alcohol manufacturers would have given up long ago.” 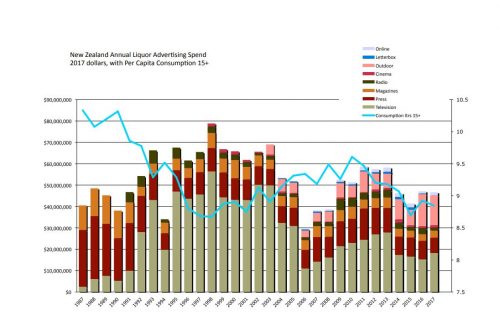 The wait is over. After weeks of rumours and speculation, Countdown Ponsonby finally opened its doors this morning. As highly anticipated, the brand-new store…