Kiwi pooches’ growing appetite for possum is helping to create jobs and putting a dent in New Zealand’s pest population.

In the past year, New Zealand dogs have devoured more than 100,000 kg of possum meat – or approximately 70,000 possums – in the form of Possyum dog rolls and dried treats.

New Zealand’s largest possum meat dog food producer Fond Foods has seen demand for Possyum double since 2017 and has recently hit a milestone of 500,000 kg of possum meat used in its possum meat products since 2010.

It’s a true paddock to Ponsonby story. Originally at home in rural areas with working dogs, Possyum now sees most of the growth coming from urban areas with expansion into New World, Pak N Save and Countdown supermarkets nationwide.

“A lot of the demand has come from urban dog owners who are keenly interested in the health and nutritional benefits of their animal’s food,” said Clint Bolderston, General Manager of Fond Foods.

“Possum meat is high in Omega 3 and 6 and can assist with skin, coat and joint health. This makes our Possyum roll a premium product, with still an excellent per feed cost.”

The demand for possum dog food has been a factor in Fond Food’s decision to expand its factory in Paeroa. The expansion will enable increased production of Possyum dog rolls and greater capacity for production of Possyum dried treats, which are becoming increasingly popular among New Zealand’s discerning urban dog population.

“We’re a relatively small New Zealand owned company and we are often up against large and multinational competitors. Possum meat dog food was almost unheard of when we first began producing it but it has helped to create a real point of difference and Possyum now makes up 20 per cent of our domestic dog roll sales,” Bolderston said.

The meat that goes into Possyum dog food is trapped or shot by registered hunters who only hunt on TB-free land where no poison has been dropped. It is then thoroughly tested and inspected at MPI accredited processing facilities before arriving at Fond Food’s factory, where it is processed into Possyum dog rolls and natural dried treats using their traditional recipe.

South Island trapper Joel Compton said growing demand for possum meat has helped him to launch a business and created new jobs. He traps anywhere between 250 and 400 possums a week in forests at the top of the South Island, earning up to $12 per carcass.

“I was trapping part time for years but pet-food wise, it’s just unreal now. In the past year I’ve turned trapping it into a fulltime business and I’ve employed two part time staff to help out,” said Compton.

“The possums are just never ending and we’re only just able to keep up with demand. We’re in the bush by 10am and working long days clearing tracks, processing and plucking.”

The demand for Possyum and other possum pet food products means the amount he earns per possum has almost tripled over the past 12 months, despite a drop in the value of possum fur. His team’s growing reputation has also seen them approached to help with possum control on iwi land and private farms, he says.

According to Predator Free NZ Trust, there are approximately 30 million possums in New Zealand today. They do significant damage to native bush and birdlife, costing New Zealand farmers about $35 million every year in damaged crops.

Fond Foods is a New Zealand-owned company which manufactures dog food for both domestic and international markets. It’s best known for its Possyum dog rolls and Superior Chunky range – which has more than 40 years’ history. The company now employs 29 people and produces more than 3,500,000 kg of dog food per year for markets in New Zealand and overseas. 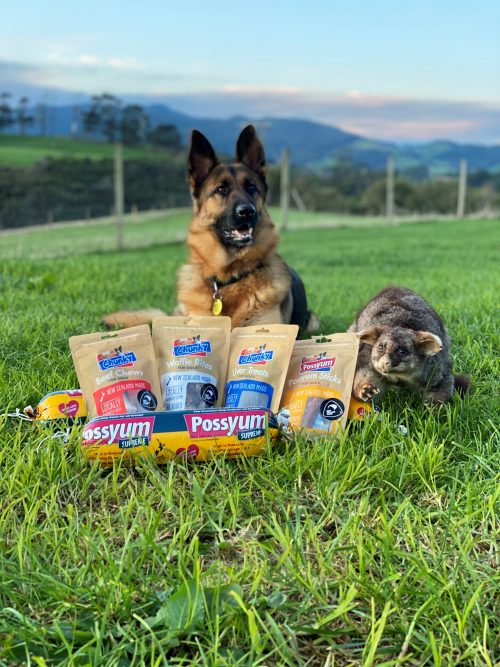 Cadbury has named Christchurch as the Caramilk capital of New Zealand. In celebration of the announcement, fans of the milk-flavoured chocolate bar will be…