“We saw this as another opportunity to keep the brand modern and contemporary,” said Jason Levine, Mondelez’s chief marketing officer for North America.

The change in the packaging followed pressure from the People for the Ethical Treatment of Animals (PETA) who have protested against the use of animals in circus shows for more than 30 years.

This is the first time Barnum’s Aminals crackers have permanently redesigned their box since the company first started producing the crackers in 1902. The company has only ever designed limited-edition packaging. The brand created an endangered species limited edition box in 1995 in a partnership with donations going to the World Wildlife Fund and in 1997 created a Zoo collection to raise money for the American Zoo and Aquarium Association. The last packaging redesign was rolled out in 2010 when Mondelez joined forces with the designer Lilly Pulitzer to raise money for tiger conservation.

Mondelez headquarters are located in the US state of Illinois, which was the first state in the country to ban the use of wild elephants in circus shows. 80 American cities across the US have at least patricianly, if not fully, prohibited the use of wild animals by circus shows since. 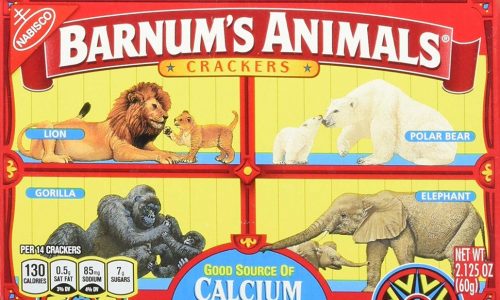