The days of abstaining from alcohol on a night out purely because you are the designated driver have disappeared. With rising trends toward moderation, health, and wellbeing, premiumisation, and general cultural shifts in ethnicities and demographics the market for no/low alcoholic drinks has boomed.

First launched in the U.K, Big Drop Brewing Co. is a multi-award-winning craft beer company devoted to crafting the finest alcohol-free beer with no more than 0.5 percent ABV. 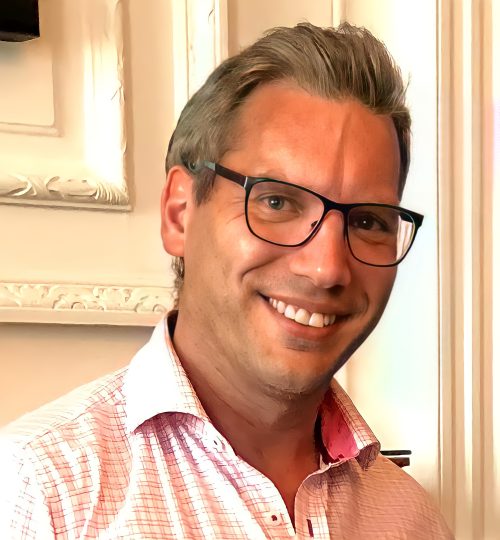 According to Sydney-based Country Manager, Darren West, as expertise and production methods have increased within the manufacture of no-low products over the past couple of years, consumers have been given greater choice combined with higher quality offerings.

“There’s no need to totally ‘abstain’ on a weeknight or drink a soft drink if you’re driving, because now you can have a high-quality drink, without the alcohol and not miss out on the experience.”

Big Drop faced many challenges when it first launched in 2016 by Rob Fink and his friend, designer and entrepreneur, James Kindred. There was only one brewing consultant that took Fink and Kindred’s ambitions seriously as Fink received numerous rejection emails from people who thought he was bonkers, and that non-alcoholic craft beer would never work.

Despite the odds stacked against them, Fink and Kindred invented a whole new way of making alcohol-free beer called Reduced Amylase Brewing. This unique brew-to-strength method meant their beers could be fully fermented without ever exceeding 0.5 percent ABV – and so are packed with flavour because nothing needs to be extracted in the process.

Big Drop launched its first beer, Galactic Milk Stout, in November 2016 and then Pine Trail Pale Ale a few months later. Both beers scooped top prizes in beer awards, including ‘World’s Best’ at the World Beer Awards and the Holy Grail of any alcohol-free drink, beating their full-strength rivals in blind-tastings.

During the pandemic, one of the biggest challenges the brand faced was having to change contract brewers.

“To put this in perspective, finding the right partner and deliver brews to our standard would normally take up to 12 months,” explained West.

“However, we managed to turn this around in Australia in just four months, thanks to a huge effort from the entire Big Drop business and a real testament to the teamwork that helps make Big Drop the company we are today.” 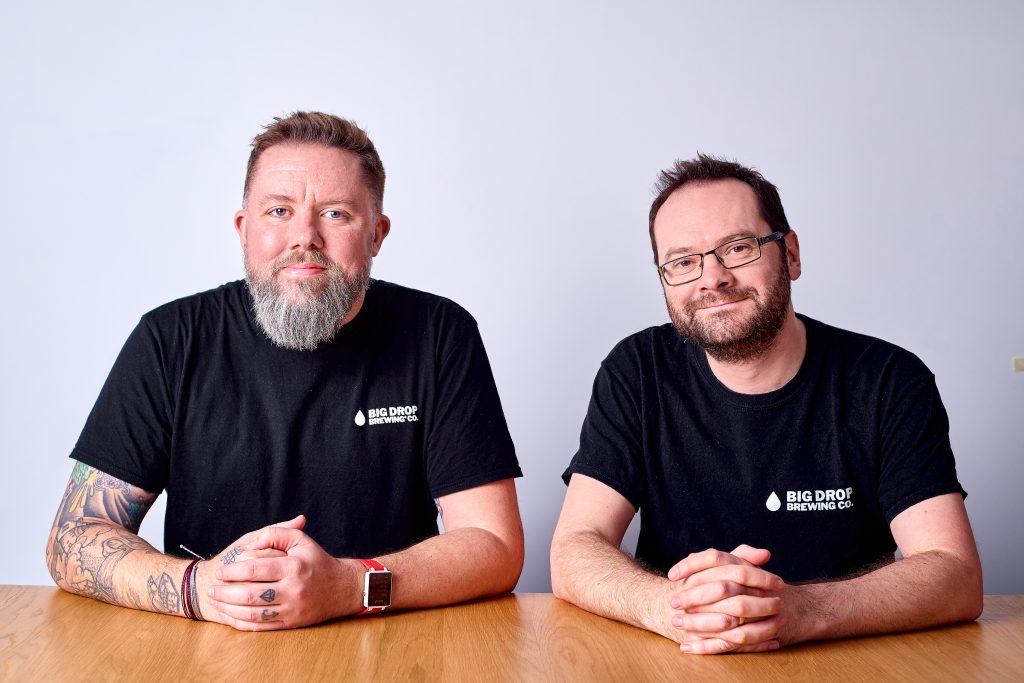 What sets Big Drop apart from other zero percent beers on the market is that the company was born from a human truth. Co-founder Rob Fink was going through a lifestyle change but could not find any high quality, full flavoured non-alcoholic beers to enjoy.

“It was just a sea of mediocre sameness of the mainstream brands.”

Big Drop was not trying to replicate or create a line extension from a full-strength brand or have an offering in a wider portfolio. They wanted to become the world’s first dedicated brewer of non-alcoholic craft beer, making beer for people to enjoy no matter what style they prefer or what their reasoning is to cut back or moderate.

“Our ethos from day one has always been that we want to brew the best beer we can, that just happens to be non-alcoholic.

“It sounds very simple, but adopting this mindset and approach meant that we removed any shackles or preconceptions and became quite experimental. This has led directly to all the different styles, the number of grains and hops we use and how we get more flavour and mouthfeel in our beers. And ultimately how we pioneered the brewing technique of lazy yeasting, that others are adopting today.” 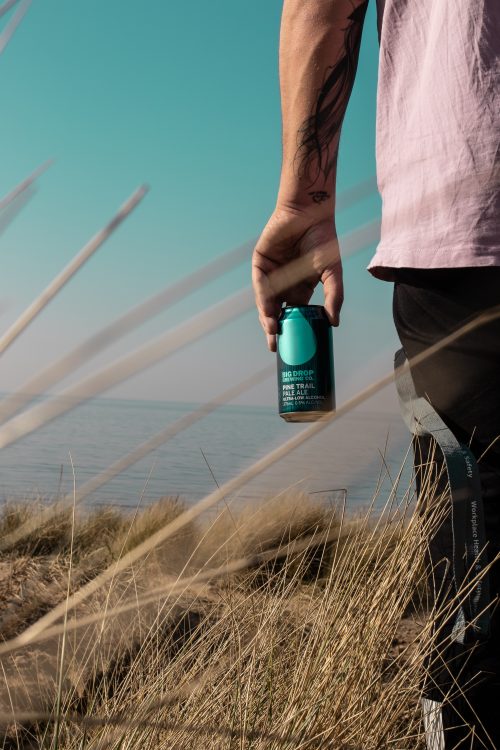 Over the past six years, Big Drop has brewed over 26 different styles of beer, ranging from flavoured stouts and porters, to sours and gossers as they keep pushing the boundaries of possibilities.

Big Drop’s launch into New Zealand has been a slow burn.

“It’s taken a while to get some traction, as we were probably ahead of the boom, but in a relatively short period of time, we’re now starting to see a growing interest from on-premise and grocery, as well as dedicated non-alcoholic online retailers such as ClearHead Drinks.”

“I can only see the category continuing to grow in New Zealand and, who knows, one day soon maybe we’ll be looking for a contract brewer to partner with there too,” continued West

Big Drop’s manufacturing process is a complicated mixture of brewing and food science. The Reduced Amylase Brewing techniques enabled beers to undergo full fermentation without ever rising about 0.5 percent ABV, retaining its flavour as nothing is extracted.

“In simple terms, there is no boil-off of alcohol, or artificial stopping of fermentation, methods used in most no-alcohol beers, our beers are naturally brewed.

“Furthermore, the average beer contains four to six ingredients, whereas in a Big Drop Beer you’re getting anything up to 20 ingredients designed to deliver a fuller flavour and mouthfeel. Nobody ever drinks a Big Drop and thinks they’re drinking an 8 percent NEIPA.”

Big Drop’s contract brewing model means that they rely heavily on relationships with suppliers for setting and maintaining key environment policies and making a meaningful contribution to the environment. The brand uses local brewing partners in key overseas markets, which not only ensure fresh bear but also reduces its carbon footprint.

The company has also taken the move to transition their packaging away from glass into aluminium where possible. Having only used bottles to begin with, Big Drop now packages 70 percent of its beer into cans. 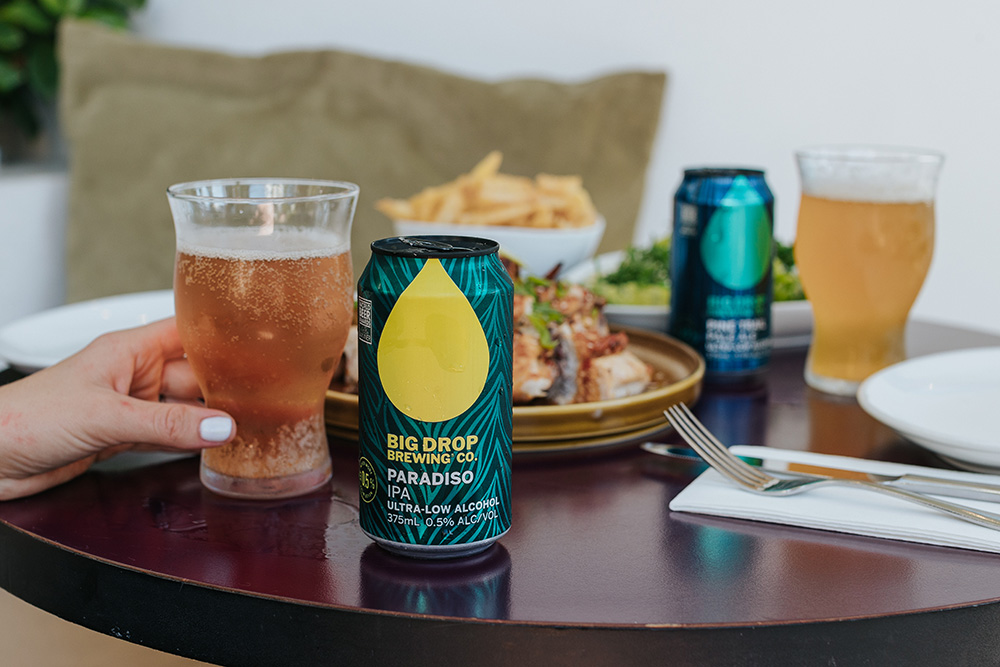 “Regardless of the recycling benefits, we believe this reduces our carbon footprint by 20 percent from reduced shipping weight alone.”

On Big Drop’s labels, consumers are also encouraged to recycle and use the PANT codes for moneyback on recycling in countries such as Sweden and Norway.

As with a lot of emerging categories, over the coming months and years, there will be a whole raft of new products entering the market. According to West, this is great for the category, as it creates excitement, offering consumers more choice.

“For start-up brands looking to enter the market my biggest piece of advice would be to take the time and care about getting your offering right, because if you take shortcuts, it could reflect negatively on other offerings you may have or serve to reinforce a negative perception of no-low products and ultimately impede the growth of the category.”

Big Drop is excited to see how the no/low category evolves in New Zealand and has no doubt that it will become a major category in its own right.

You can learn more about Big Drop Brewing at www.bigdropbrew.com