An investigation conducted by the Daily Telegraph in the UK has recently found that one in every 100 plastic packs of raw supermarket chicken harbour a potentially dangerous level of campylobacter. The deadly bacteria, lurking on 9 million packs of chicken sold each year, is also the UK’s leading cause of food poisoning. According to Public Health England, Campylobacter was responsible for more than 485,000 recorded cases in 2016, and the Food Standards Agency (FSA) estimates that around 100 death a year are caused by this bacteria.

Even though the risk of becoming ill was previously considered ‘extremely unlikely’, food safety experts are now urging customers not to eat with their bare hands after touching plastic packs of raw chicken, unless they want to expose themselves to cross-contamination.
Despite the FSA’s calls for supermarkets to offer small plastic bags to keep raw chicken separated from other food, UK retailers seemed reluctant to address the problem, out of concern that it could have a negative impact on sales. 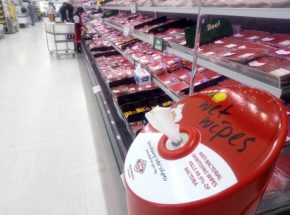 Yet, store owners all have the interest in making sure their customers are safe, and cost-effective solutions are already available. New World Devonport, for example, has adopted a hand hygiene system that is specifically designed for supermarkets. The all-in-one, free standing, antibacterial wet wipe station, recently introduced by NZ-owned and operated company Offshoot, can be positioned next to the trolley bay and meat sections in any store.

Meat packs and trolleys are, notoriously, the most bacteria-ridden spots. A study conducted by the University of Arizona in 2011 found that 72 percent of trolleys presented traces of Coliforms (faecal bacteria), and half tested positive for the potentially deadly bug E. Coli.

A small gesture, like wiping down the trolley, would have made a huge difference.

PASCALL is set to shake up Kiwis’ tastebuds with its latest flavour combination, PASCALL MILKSHAKES flavour LUMPS. The tasty new treat is a unique…