Bill Johnston has never missed a Fieldays. The legendary Invercargill farmer has been making the annual pilgrimage since 1969 and has watched the event grow and evolve with the times. 2020 will be the first year that he won’t be making the trip, with Fieldays being entirely online.

Johnston is used to hitting milestones though. With 48 years of marriage to wife Anne, the 73-year-old is sure he’ll still enjoy the virtual event despite missing his yearly six-week Fieldays holiday up north. He admits he’s not the most tech-savvy bloke but he’s determined to learn a few new tricks and give Fieldays Online a shot.

“It’s going to be a whole new ball game, but I’ll find a way there with a bit of help. The boss will help me. She’s a lot savvier than I am; she can manage internet banking, I can’t!” Johnston chuckled.

Although things are a bit different for Fieldays this year, Johnston is positive about the Society’s decision. “You’ve got to do what you’ve got to do. You can’t just say it’s too hard and cancel everything until next year. You could have done that; you’ve got to prove that Kiwi’s can-do.” 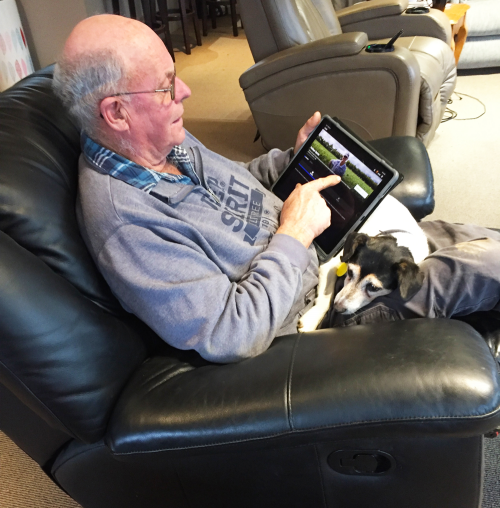 The bonus is the online event is free. “I’ve paid for a fair few, but a few times I’ve scored some free ones,” said Johsnton.

Farmers are used to working from home and with Fieldays Online being two weeks instead of the usual four days, Johnston reckons he’s going to spend a bit more time surfing the internet.

“I’ll have a look each day and see what tickles my fancy. Might have another browse the next day, spend an hour or so here and there.

“At Fieldays I usually do all the donkey work for my son Graeme. We both have a traipse around the place and see what we can find, then we both go back to do a bit more in-depth ‘cage rattling’ or tyre kicking, which I’m sure exhibitors won’t miss from me. It’s probably a bonus it’s online, mind you, they won’t have to deal with the non-serious tyre kickers. I’ll miss having a chinwag with some exhibitors, but I won’t need to walk past sites I don’t care about, so I guess that’s another bonus.

“I’ll have my own Fieldays Online holiday in the lounge, with my feet up and I guess having it on-demand I can watch what I want and when I want. We’re going to give it a go, but don’t worry we’ll be back next year.”

The Society will be bringing back the physical event alongside a digital one in 2021, an idea Johnston supports. “It’s a great idea, having the online one as well. If people can only go on one day and they miss things, they can bring it up online. Not everyone has the luxury to spend all four days there.

“We’re going to give it a go. The grandkids are tech-savvy, they’ll come and give us a hand, if Jet (Johnston's trusty canine helper) can learn some new tricks, I’m sure I can learn a few tech tricks!”