The ‘Raeward Fresh odyssey’ has not come to an end yet, with Foodstuffs achieving only half a victory. Its proposed South Dunedin’s fresh food supermarket and café has been approved by the Council, but resource consent is subject to conditions that restrict the range of goods sold. No liquor, no convenience items; the store would only be allowed to sell fresh produce, flowers, fresh meat and meat products.

The decision has come as a 'cold shower' for the supermarket chain.
"We are currently undertaking a review of the decision with our planners and are unable to provide comment at this stage," said Roger Davidson, general manager of property and development, Foodstuffs South Island. "Once we have completed the review, we will be able to share more details."

Over the past few weeks the 1,108 sqm outlet, due to be built in an industrial area, had encountered the firm opposition of processing planner Darryl Sycamore, who noted that the zone rules did not allow for retail activity and recommended to decline consent. The council planner had also advised that, although the proposal was for a retail market promoting fresh local produce, consent was also sought to sell liquor.

In response, Foodstuffs’ legal counsel Chris Fowler and property development manager Rebecca Parish both clarified that the planned store will be focused on fresh meat and produce, with other products being ‘very much subordinate and only a complement to market produce for convenience.’

In its final decision, on April 15, the Committee agreed that the development will positively affect the area with investment in the existing buildings, construction activity and employment. The new store proximity to Foodstuffs’ own distribution centre was also taken into account as ‘a point of difference that would not be readily available to many other retailers.’

Coming to the sore point, the Committee openly expressed concerns that, despite the produce focus, the proposal will involve other products.

“While the applicant contends that it is not a supermarket, the proposed design and layout and the photography provided suggest it strongly resembles the produce section of a supermarket with additional convenience items including liquor and a range of groceries designed to extend the range of goods sold,” the written decision read. “The Committee considers that a simpler more distinguishing approach would be to restrict the sale to produce, meat and flowers, and for the other items not to be sold on the premises.”

Foodstuffs has time until the end of the month to appeal against the decision. 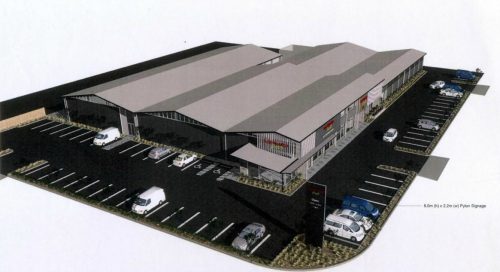 The UK has secured an estimated $4.4 million dairy trade deal with China. The agreement gives the UK the ability to export its imported…