Sixteen years ago, seven-year-old Sarah Goss took part in her first-ever Weet-Bix Kids TRYathlon in Taupo. Now 23, Goss is the captain of the NZ Black Ferns Rugby Sevens team that won a silver medal at the 2016 Rio Olympics.

‘The Weet-Bix TRYathlon gave me a great foundation for my career,” she said. “I was a pretty active kid, but my parents were farmers, so we didn’t have a sporty ‘life’, as such – we kept active by helping out.” This year, Goss was also named NZ Player of the Year, and was a finalist for International Player of the Year. 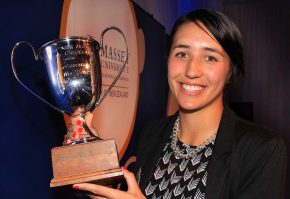 She went on to participate in two more TRYathlons, but it was at that first life-changing sports event that she caught the eye of the Sanitarium team. Goss recalled that moment.

“I came home from school one day, and my granddad told me Sanitarium had rung to ask if they could put me on the front of a Weet-Bix box, and he’d said yes. None of us was sure if he was telling the truth, so we just carried on,” Goss said. “Then a few weeks later we were away for the weekend and took a trip to the local supermarket. We went down the cereal aisle – and there was my face on the Weet-Bix box! We had honestly thought Granddad was joking.’

Goss is currently looking forward to the next big goal, the 15th Rugby League World Cup in August next year.

After several rounds of testing and interviews, Countdown has named its top twelve checkout operators, as part of the Checkout Operator of the Year…