Graphically stunning images on the packaging of Sanford’s New Zealand Greenshell Mussels helped win the entry both best in category for Flexible Packaging and best Flexo Process at the Pride In Print awards.

Entered by SealedAir Hamilton, judges said the skill in the pre-press has been used to maximise the quality of the packaging with the image reproduction “graphically stunning.” 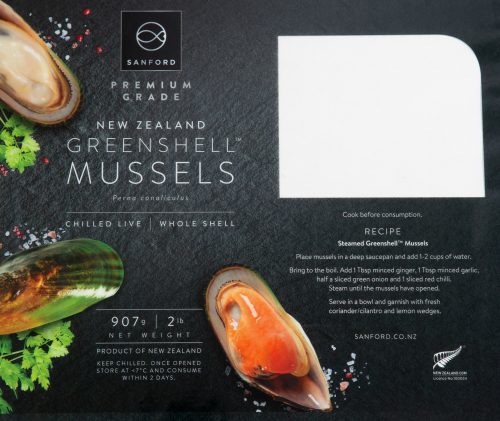 Judge Mark Thian said technically the colour separation was smart and it was a really nice looking job.

The job was printed in four colours plus white on an 870mm sheet in one press pass. The print run was 8000 metres.

Judge Greg Wardrop said what really stood out was the clarity of the print and the back story on what the company had to do to achieve that.

“It is a typical example of a New Zealand company using their initiative and skill to achieve this result. Five years ago it wouldn’t have been possible to use just five colours and get this result but now with the technology and skill in pre-press they’ve done it. However, it would still have been very challenging to have this amount of control on the press.

“It’s a really well executed and thought out design and the run in relatively long by New Zealand standards.

“We found no faults in it and the entry was a standout on the (judging) table.”

On its entry, SealedAir Hamilton explained that the second black was dropped from the design to reduce the cost of plates and ink usage. Plates were pre-cut to the exact size to reduce downtime in plate mounting. The job was finished by laminating on the top web and slitting into roll stock for customers to use on thermo formed plates.

Greenshell Mussels are grown in four main areas in New Zealand: Marlborough, Golden Bay/Tasman Bay, Coromandel and Stewart Island. They grow on longline technology that uses continuous crop ropes, ranging from 3,000 to 4,200 metres in length. Sanford accounts for over 40% of the national harvest volume, and employs over 400 staff.

Lidl GB has announced that it will stop displaying cartoon characters on its own-brand cereal ranges by spring 2020, to help parents tackle pester…